Phones are getting taller. Just a couple of years ago, all phones had 16:9 displays, but now, many use tall 18:9 aspect ratio screens. This allows for more screen real estate in narrower frames, addressing two things people want: bigger screens in smaller phones. Some phones, like the LG G8 ThinQ, iPhone XS and XR, or Samsung Galaxy S10, are adopting even taller, skinnier aspect ratios. But Sony’s new Xperia 10 lineup takes it the furthest with displays that stretch to a full 21:9 aspect ratio.

The big takeaway is that they’re short on selling points, but their super tall displays is certainly one of them. With it, you can watch a bunch of movies in their native aspect ratios (sans black bars). You can also shoot photos and footage in 21:9 with the phone’s camera app.

When it comes to living with the Xperia 10, its slender proportions make it far more comfortable to hold and pocket than most other big-screened devices. Most of today’s smartphones can’t be used one-handed or fit cozily in anything smaller than a coat pocket. Sony found a way to make that happen, but the rest of the phone fails to back up its most impressive feature.

Our review of
Sony Xperia 10 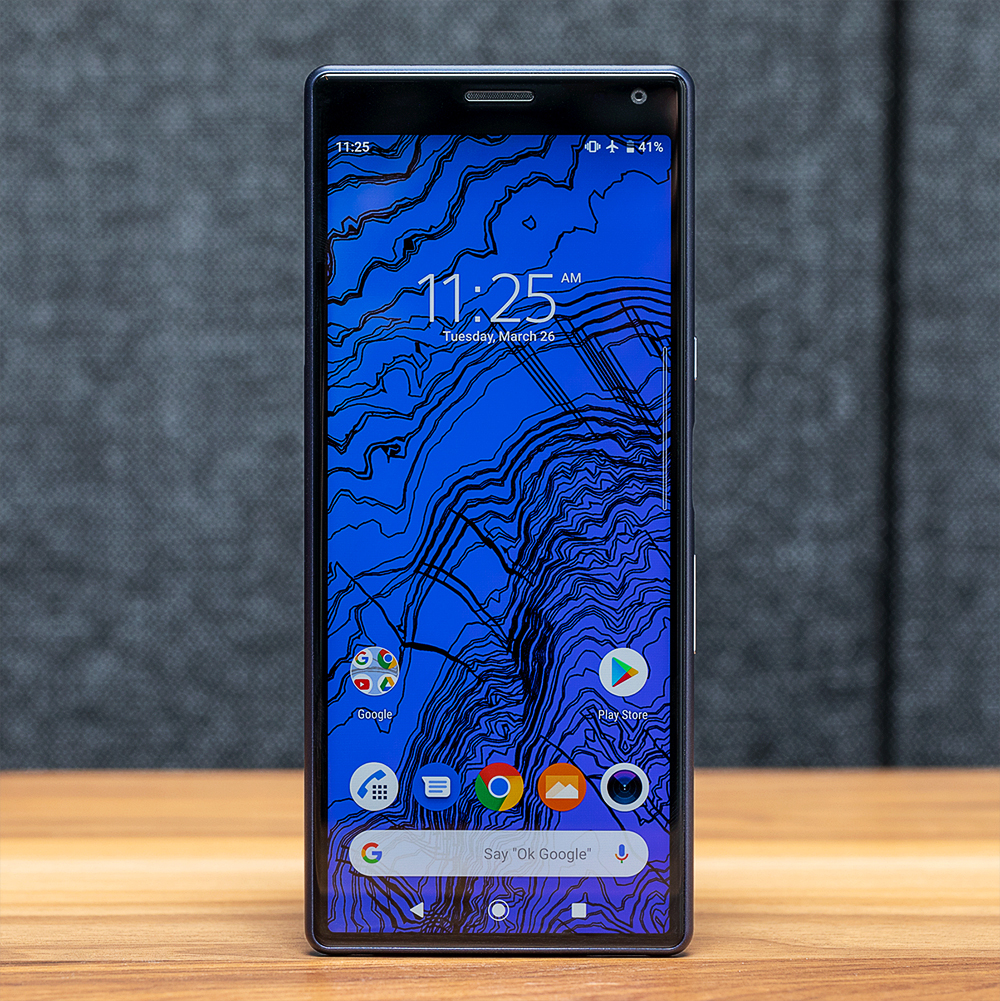 Our review of
Sony Xperia 10 Plus 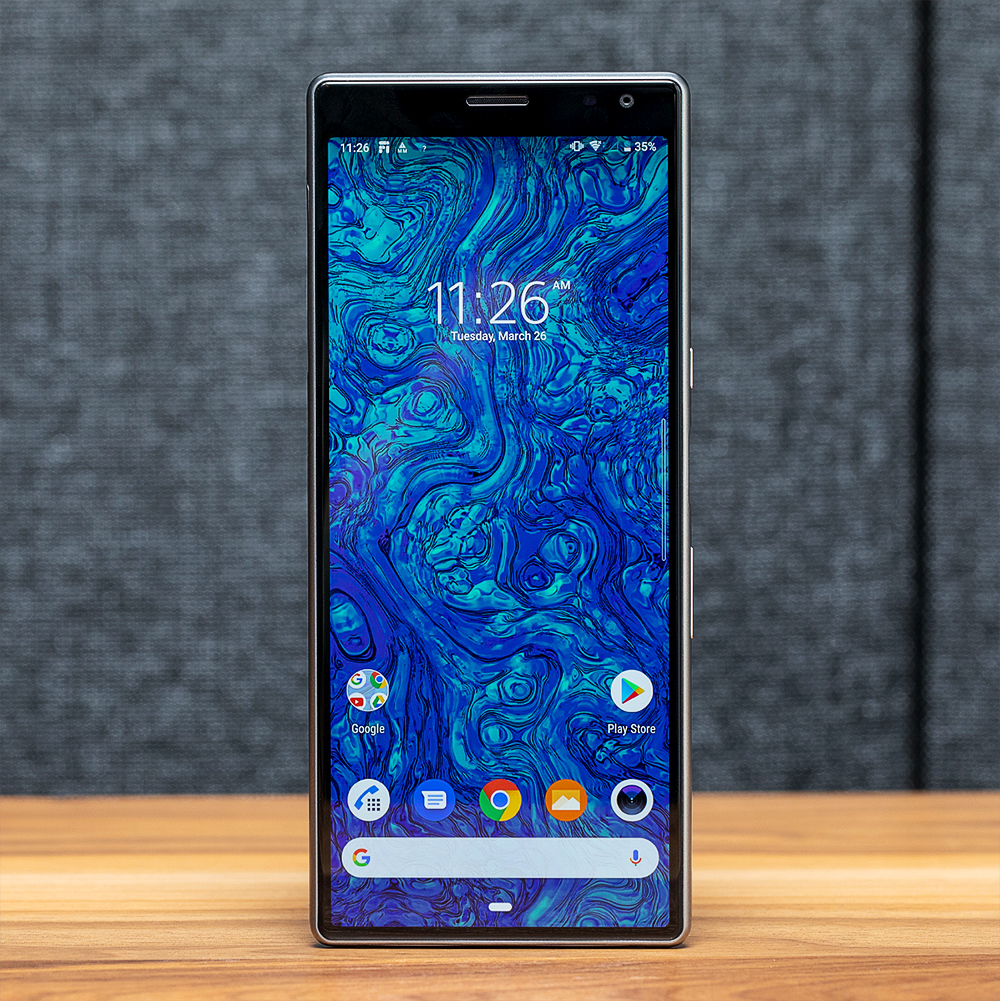 To name a few of the biggest offenders, its buttons barely raise up out of the frame, making them nearly impossible to feel for or press. The hardware is slow, the cameras are miserable, and the glossy paint surrounding the camera bump chips off after a few weeks of use. If you want to watch 21:9 movies, make sure you’re doing it with headphones because the single bottom-firing speaker is weak. Forgiving cheaper phones for little flaws is easy and expected. But when $300 can get you a great phone, like the Moto G7, Sony’s mistakes are too obvious to ignore.

The 21:9 display is arguably the most eye-catching feature. Both the 6-inch Xperia 10 and the 6.5-inch Xperia 10 Plus feature 1080p LCD displays that extend all the way down to the phones’ bottom edges. Instead of going for a notch or hole-punch camera, Sony’s phones utilize a thick bezel up top to house the selfie camera and ear speaker. It’s similar in execution to last year’s Sony Xperia XZ3, except Sony managed to remove its logo from the bottom chin bezel and replace it with more screen.

It looks good for a phone in this price range, but a phone this tall actually needs a bottom bezel to balance it out. I can appreciate Sony’s effort to stretch the display all the way to the bottom, but the ergonomics yielded from its easy-to-hold design are thrown out the window when I try to flex my thumb toward the bottom of this huge screen. Whether I’m reaching toward essential navigation buttons, typing in Messages, or doing anything that requires me to touch the bottom of the screen, I’m reminded that form was picked over function at every turn. The slight exception is the fingerprint sensor, which is mounted on the side of the phone. It’s slightly concave to serve as a guide for your finger.

Sony seems to expect that ease of use will be an issue for some, and it attempts to alleviate it with a few software features. The first lets you snap the screen into “One-handed Mode” by double-tapping the home button. This shrinks down the screen to something that’s easier to use with one hand. It works, but it looks ridiculous in practice.

The other consideration is its Side Sense user interface. It’s a translucent vertical bar that sits to the right on the screen. When you tap it twice, a pop-out menu appears, giving you access to all of your apps, the notification tray, and various hardware functions within the reach of most thumbs. Of the two solutions, this is the better one, but it still feels like a ham-fisted solution to a problem that its huge screen creates.

The Xperia 10 lineup comes with Android 9 Pie, and the new gesture-based navigation is enabled by default, but you can switch to the button navigation (which I promptly did). If you’re coming from a Samsung phone or a Google Pixel, things will feel slightly different in Sony’s world, but everything’s here. Sony used to make its own version of the essential apps, but it has since shifted to using Google’s stock apps, which I’m not going to argue about. Upon setting up the phone for the first time, it offers to install a bunch of bloatware, including Booking.com, Amazon, AVG virus protection, Facebook, and other apps, but, thankfully, you don’t have to install any of them.

Despite its tall (or extra wide, depending on how it’s oriented in your hand) screen, using apps and playing games mostly isn’t a problem on the Xperia 10. Most apps work fine and adjust automatically to the 21:9 aspect ratio. However, one of my favorite games to play on the subway, Alto’s Odyssey, has its menus chopped off due to the aspect ratio. Whether it affects you and the apps that you like to use will vary, but chances are, there is an app or game you use that the display will muck up a bit.

Your favorite apps might be butchered by the tall, skinny display

What’s worse than these display issues is that its hardware can’t keep up too well. The Snapdragon 636 processor in the Xperia 10 Plus is noticeably faster than the Xperia 10’s Snapdragon 630, though they both don’t work well under even a minor load of common apps, and the user interface animations stutter even when nothing is going on. Its fingerprint sensor, which is one of the best-designed features on the phone, is super slow to recognize fingerprints. I often have to reapply my finger for it to read correctly.

In addition to the screen, cameras play a big role in what phone you end up buying. Both the smaller and larger Xperia 10 phones house a dual-camera system: 13-megapixel and 5-megapixel cameras in the Xperia 10 and 12-megapixel and 8-megapixel cameras in the 10 Plus. No matter what a budget phone gets right, the cameras are usually the point where sacrifices are made, and Sony’s phones are no exception. They are sluggish to launch, slow to capture, and the photo and video results aren’t great. It’s not the worst, but if you like to post photos on Instagram, you probably won’t want to publish these.

Both phones charge over USB-C, and each gets a few points for including a 3.5mm headphone jack. In terms of battery performance, standby mode drains slowly as expected, but regular use of everyday apps, like their camera, can quickly deplete them. Messing around with its goofy portrait selfie mode for a few minutes drained about 5 percent of the smaller Xperia 10’s battery. Unless you bring a portable power bank, don’t expect these phones to last any longer than a day under normal use.

Sony hasn’t yet figured out how to make 21:9 work on a phone

I don’t think that all of my issues with the Sony Xperia 10 and Xperia 10 Plus would be resolved if it instead used 18:9 aspect ratio displays. Sure, my apps would all look the way they’re supposed to, and I would likely see better performance with a smaller screen. To that end, I give Sony credit for trying to raise the bar for itself, but these phones prove that it shouldn’t have been so eager. Even with its eye-catching display, this is a bare-bones Android experience that, in typical Sony fashion, does too little and costs too much.

I’m convinced that there’s a future for 21:9 aspect ratio displays in smartphones — who doesn’t want a bigger screen in a smaller device? — but I don’t think we’ll get there with improvements in power and screen quality alone, which the expensive Sony Xperia 1 brings along with its 4K OLED display and a Snapdragon 855 processor. There are some major usability obstacles to overcome before it becomes the norm, and the Xperia 10 is a bumpy start.

Vox Media has affiliate partnerships. These do not influence editorial content, though Vox Media may earn commissions for products purchased via affiliate links. For more information, see our ethics policy.