Don’t buy the Samsung Galaxy Fold. It’s almost strange to have to write those words explicitly because after everything that has happened with this phone / tablet hybrid, you’d like to think that everybody would know the score already. The review units that broke, the launch that was delayed, the newly fixed version, the sky-high price — all of it is well-known and well-documented. But Samsung is selling the Fold, albeit in very limited quantities, as though it is perfectly normal and reasonable to stroll into an AT&T store and buy a fragile, experimental device for $1,980.

It’s not. But that doesn’t mean there aren’t interesting things to learn from looking at the Galaxy Fold — again. I’ve already reviewed the Galaxy Fold once in some depth, publishing it just before Samsung canceled the original launch. I won’t go into as much detail here as I did then because less has changed than you might expect. Six months later, and it is awkwardly crammed into my pocket once again, fixed up to make it less likely to be destroyed by random debris.

And no, this one hasn’t broken, even after a few weeks of regular use.

But there’s another hypothesis Samsung has — perhaps inadvertently — proposed: a phone that’s bigger on the inside is actually a good idea.

Our review of
Samsung Galaxy Fold 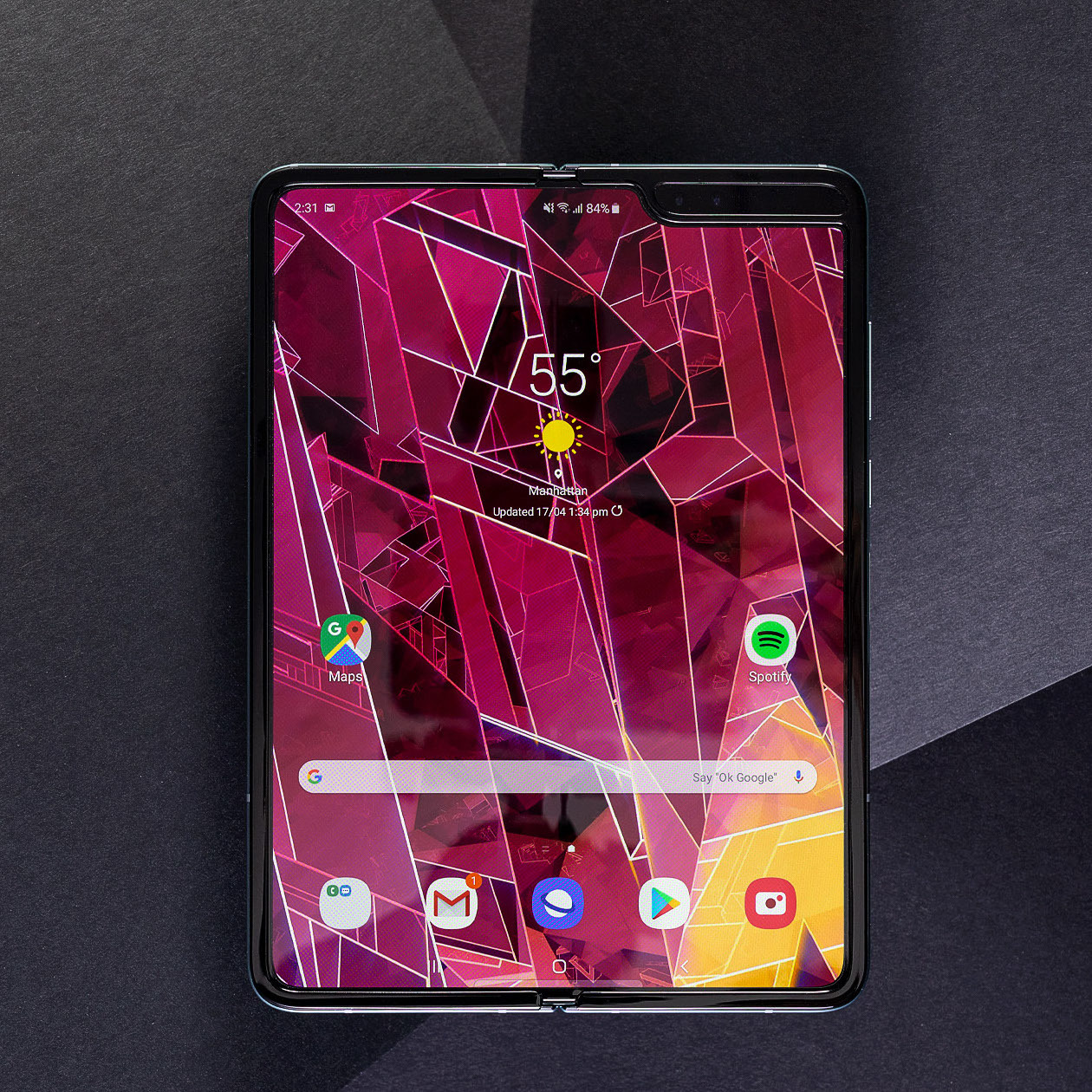 As we have reported before, Samsung has made fairly minor tweaks to the hardware in an effort to prevent damage to the delicate screen. The most important is that it extended the factory-installed screen protector out to the edges so it’s covered by the plastic bezels and won’t tempt anybody to peel it off.

While that change might protect against users doing the wrong thing, it doesn’t do much more than that. The plastic is still really soft and can easily get dinged up. My unit has some visible indentations from when I scrolled too quickly without realizing my fingernail was pressing on the screen. Samsung’s new unboxing experience includes an optional concierge to walk you through the many, many warnings that now come in the box. Among those warnings is to keep fingernails away from the screen. Whoops.

Samsung’s other hardware changes involve keeping debris from getting into the hinge mechanism. There are plastic caps where the screen bends, tighter tolerances in the gaps around the hinge, and even the gap when the whole thing is closed is smaller now. Plus, if any debris does get into the hinge (which is what happened to my first review unit), there’s a metal layer between it and the screen.

Is all that enough? I don’t know. Nobody knows. People have definitely busted Galaxy Fold units since the rerelease. I didn’t bust mine in the few weeks that I had it, but I was also terrified that I would if I wasn’t careful. I didn’t go live in a bubble like Joanna Stern at The Wall Street Journal did, but I treated the thing tenderly and carefully — more so than anybody should have to with a phone, even one that costs $2,000.

Samsung is offering a one-time screen replacement within the first year for $150. That’s nice, I guess, but at this point, the only people buying the Fold are going to be the kinds of Samsung super-fans that are surely worth more than $150 to the company.

Anyway, the reality is that, as it exists in the Galaxy Fold, the flexible screen is going to be delicate, and you are going to need to treat it delicately. Using it will impinge on your life in ways a more durable phone — or even carrying both a phone and a tablet — won’t.

So far as I can tell, the only software change of note on the Galaxy Fold is that Samsung mapped the Bixby assistant to the power button instead of the (still oddly separate) fingerprint sensor. Everything else is the same.

That’s mostly bad news, but it’s mostly not Samsung’s fault. Android still suffers from an identity crisis any time it’s on a screen larger than seven inches. Many apps stay open when you switch from the small screen to the big, but just as many don’t. Some apps look nice both expanded up on the big screen and work reasonably well on the tiny front screen; many more do not.

Every smart device now requires you to agree to a series of terms and conditions before you can use it — contracts that no one actually reads. It’s impossible for us to read and analyze every single one of these agreements. But we started counting exactly how many times you have to hit “agree” to use devices when we review them since these are agreements most people don’t read and definitely can’t negotiate.

To use the Samsung Galaxy Fold, you must agree to:

There are many optional agreements. As I was using the AT&T version of the Galaxy Fold, there were more than I expected. Here are just a few of them:

There may be others. For example, I already had a Samsung account, so I didn’t need to agree to more terms for that. AT&T preinstalls something like 20 apps on the Galaxy Fold, any one of which could include yet more terms of service. Samsung’s Weather app also has its own privacy policy that may include sharing information with weather.com.

Final tally: all told, there are four mandatory agreements and about 10 optional ones I expect most users will want to agree to.

Samsung can’t solve all of those problems, but I do wish it had tried to iterate more on the multi-window setup. You can technically tile three apps on the screen and have pop-over app windows on top of them if you like. But in practice, using anything more than basic split-screen is a huge hassle. That’s not a problem in and of itself; only power users could possibly want more than two apps visible on the Fold’s 7.3-inch screen.

But even just split-screening apps on the Fold feels awkward and jittery compared to the multi-window options on the iPad (and forget about comparing any of this to Windows). iPadOS’ Slide Over just feels much more natural, and the animations are much smoother. Android as a platform has some way to go.

The other thing that hasn’t changed is how awkward the Fold is when it’s closed up. I didn’t expect this, but if the main thing that kept me from wanting to use the Fold wasn’t the fragile screen, it was how annoying it was to carry around. It’s too thick to comfortably fit in a pocket, and it’s too tall as well.

When I reviewed the Fold back in April, that awkwardness was kind of intriguing. It meant that I used the phone less because I wouldn’t want to bother with the tiny screen. When I did unfold it and really use it, I was much more engaged. It turned the Fold into a device I actively chose to use instead of a device that invisibly stole my time by tempting me to scroll through social media all day.

I still feel that way about the Fold, but it goes too far. I do want a good screen that I can hold in one hand on the subway. It might cause me to lose an hour to Twitter, but that’s on me.

The Galaxy Fold forces you to make too many compromises. You have to compromise on durability, on having a phone you can fit in your pocket, and, most of all, on price. All of those compromises exist solely to get you the flexible screen, which is itself compromised because it still has that crease down the middle.

This got me thinking: what if instead of a crease down the middle, the screen was just split? You’d lose having a seamless canvas across which to splay a window, but you’d theoretically be getting rid of all those other compromises. A split-screen phone could be thinner, have a more pocketable shape, be more durable, and be cheaper.

There have been split-screen phones in the past, and there are even some coming out right now. The LG G8X is one example. If the software was good (by which I mean supported at the Android platform level), a dual-screen device could get you a lot of the benefits of the Galaxy Fold with fewer of the problems. You’d miss out on the futurism, but you’d get something more usable.

A phone that’s bigger on the inside is still a good idea, but nobody’s figured out how to do it yet

That seems to be the thinking behind Microsoft’s Surface Duo, but that won’t be available for another year. That’s probably for the best since I suspect it’ll take that long for Android and app developers to get ready.

The day before I published this review, Samsung teased another folding phone, this time with a vertical form factor like the clamshell phones of old. There’s no timetable for releasing it, but here’s my advice: wait until the screen can be made of glass or some other more durable material.

As for the Galaxy Fold, don’t buy one. But you should go to a store and play with one. As an experience, there’s a there there, if you know what I mean, even though the screen technology and software clearly aren’t there yet.

Vox Media has affiliate partnerships. These do not influence editorial content, though Vox Media may earn commissions for products purchased via affiliate links. For more information, see our ethics policy.